This project was partly inspired by the work of Leonard Jarraud, a little known painter active around the turn of the 20th century, a time when great changes were afoot in the art world with the advent of impressionism, cubism etc. Paradoxically, he was thought of as a ‘Realist’ painter since his pictures often contained people going about their daily business. He painted small canvases during the autumn and winter, feeling that there was too much colour during the rest of the year. He spent the summers holed-up in his elderly mother’s house, often ill in bed. Despite the appeals of his patrons, Jarraud died in penury and his pictures can only be seen a few here and a few there in local museums. However, there is something about his treatment of the subject matter that I identify with, living in the same area and seeing a landscape that is largely unchanged.

The other inspiration came out of a conversation with Tim Parkin a few years ago, where I reacted against the trend of ‘focus stacking’ in photography, an attempt to render ever more detail. I wondered whether it might not be more interesting to do the opposite and render large parts of the image more ambiguous, enabling one’s emotional imagination more scope to interact with the image. This turns out to be called Pictorialism. 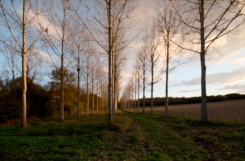